Meditations from the Pen 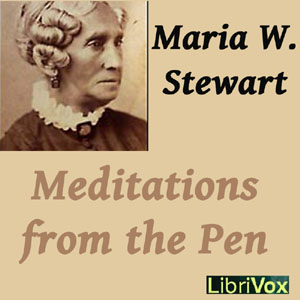 Meditations from the Pen

LibriVox recording of Meditations from the Pen, by Maria W. Stewart. Read by James K. White

Maria W. Stewart was America's first black woman political writer. Between 1831 and 1833, she gave four speeches on the topics of slavery and women's rights. Meditations From The Pen of Mrs. Maria W. Stewart—published in 1879 shortly before her death—is a collection of those speeches as well as her memoir, some meditations and prayers. They are political, poetical and sermon all at the same time; but in the mileu in which she lectured, they were a critically important part of the abolitionist movement years before the contributions of others such as Frederick Douglass and Sojourner Truth. Her speeches and essays espoused a return to Christian values and morality, but also proposed fundamental changes in gender roles in the midst of tremendous public opposition to the rights of blacks and of women. (Introduction by James K. White)